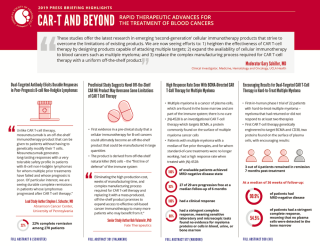 Four early-phase studies being presented yesterday, during the 61st American Society of Hematology (ASH) Annual Meeting and Exposition spotlight the rapid advances being made in cellular immunotherapy for blood cancers. Researchers will present the results of early-phase studies of emerging “second-generation” cellular immunotherapy products that strive to overcome the limitations of existing products.

Cellular immunotherapy uses genetic engineering to enhance the ability of the immune system – the body’s defense system against infection and disease – to kill malignant cells in the blood, the bone marrow, and other sites, in order to keep cancer from coming back. Chimeric antigen receptor T-cell (CAR-T) therapies are developed by harvesting a patient’s own T cells (the immune system’s primary cancer-killing cells), engineering them to target proteins specific to the surface of cancer cells, and reintroducing these modified T cells back into the patient’s immune system to kill the cancer cells.

First-generation CAR T-cell therapies primarily target CD-19, a protein found on the surface of most normal and malignant B cells in B cell cancers such as lymphoma. These therapies have been shown to produce long-term remissions in about one-third of patients with B-cell lymphomas that have not responded to prior therapies.

“We are now seeing efforts to: 1) enhance the effectiveness of CAR T-cell therapy by designing products capable of attacking multiple targets; 2) expand the availability of cellular immunotherapy to other blood cancers such as multiple myeloma; and 3) replace the complex manufacturing process required for CAR T-cell therapy with a uniform off-the-shelf product,” said press briefing moderator Gary Schiller, MD, UCLA Health.

One phase I study to be presented today evaluates an off-the-shelf cellular immunotherapy product that targets two proteins found on the surface of lymphoma cells, including its potential to “revive” previously administered CAR T cells that have stopped working. Another study presents preclinical results for one of the first cellular immunotherapies to be based on off-the-shelf natural killer (NK) cells and the first, according to its manufacturer, to be genetically engineered to contain three active anti-tumor components.

The other two studies, also phase I studies, assess novel CAR T-cell therapies for multiple myeloma that test different dual-target strategies. One product is genetically engineered to contain two proteins that attach to BCMA, a protein found almost exclusively on the surface of plasma cells, the immune-system cells that become cancerous in multiple myeloma. The other is designed to target both BCMA and CD-38, another protein found on the surface of plasma cells. In both studies, many patients achieved minimal residual disease (MRD) negativity, which means that using highly sensitive testing fewer than one myeloma cell per 100,000 cells was identified in the bone marrow. Previous studies have shown that patients who achieve this milestone have a lower risk of relapse after more than three years of follow-up.

The three phase I studies also hint at the possibility that dual-targeted CAR T-cell therapies might result in fewer patients experiencing moderate to severe cytokine release syndrome (CRS), a known adverse effect caused by an immune response in the body to the activated T cells that are attacking the cancer. CRS causes flu-like symptoms such as fever, body aches, and fatigue, and in severe cases can be life-threatening. Treatment with the drug tocilizumab can reduce CRS symptoms.

This press conference will take place on Saturday, December 7, at 7:30 a.m. in the ASH press briefing room W221DE.

Dual-Targeted Antibody Elicits Durable Responses in Poor-Prognosis non-Hodgkin Lymphoma (NHL)
#6 Mosunetuzumab Induces Complete Remissions in Poor Prognosis Non-Hodgkin Lymphoma Patients, Including Those Who Are Resistant to or Relapsing after Chimeric Antigen Receptor T-Cell (CAR-T) Therapies, and Is Active in Treatment through Multiple Lines

Patients with B-cell NHL that had returned after or failed to respond to a median of three prior therapies showed complete responses and durable remissions after being treated with an investigational drug called mosunetuzumab. Among patients whose lymphoma progressed after treatment with CAR T-cell therapy, 22% had complete remissions when treated with mosunetuzumab. This new drug targets two proteins, one on the surface of tumor cells and the other on the surface of the recipient’s Tcells.

“Unlike CAR T-cell therapy, mosunetuzumab is an off-the-shelf immunotherapy product that can be given to patients without having to genetically modify their T cells,” said lead author Stephen J. Schuster, MD, of Abramson Cancer Center at the University of Pennsylvania in Philadelphia.  “Mosunetuzumab generates long-lasting responses with a very tolerable safety profile in patients with B-cell non-Hodgkin lymphomas for whom multiple prior treatments have failed and whose prognosis is poor. Of particular interest, we are seeing durable complete remissions in patients whose lymphomas progressed after CAR-T.”

New treatment options are needed not only for patients in whom CAR T-cell therapy has failed, but also for those patients whose lymphomas are getting worse so quickly that they cannot wait for CAR T cell manufacturing, which takes several weeks, Dr. Schuster said.

Mosunetuzumab is a synthetic antibody designed to bind to a specific marker on tumor cells. It works by activating the patient’s own T cells, stimulating them to attack and kill cancerous B cells to which they have been introduced by the novel antibody. The drug could potentially be given to patients before, after, or in combination with CAR-T, which needs to be further tested and explored, researchers explained.

Data were presented for 270 patients (median age 62, 172 men) enrolled in the phase I trial in seven countries (the United States, Australia, Canada, Germany, South Korea, Spain, and the United Kingdom). All had B-cell lymphomas that had come back or not responded to a median of three prior therapies. Two-thirds of patients (67%) had fast-growing lymphomas; 85 (31%) patients had more slow-growing forms of the disease. In 30 patients (11%), the cancer was resistant to or returned after an initial response to CAR T-cell therapy; in 77 patients (29%), the disease had progressed after a stem cell transplant.

All patients were treated with mosunetuzumab by intravenous infusion. They had an imaging test at either six weeks or three months after starting therapy to assess the initial response to treatment, and responses continued to be followed every three months thereafter.

A study of a higher dose of mosunetuzumab is now enrolling patients, Dr. Schuster said. Long-term follow-up of these patients will ultimately help to better evaluate the durability of response data.

“Larger, randomized trials are needed to further confirm these promising data and determine whether the treatment benefit of mosunetuzumab is enhanced when it is used earlier in the course of lymphoma therapy or in combination with other agents,” Dr. Schuster said.

This study was supported by Genentech, Inc.

Stephen J. Schuster, MD, Abramson Cancer Center, University of Pennsylvania will present this study during the plenary session on Sunday, December 8, at 2 p.m. in Hall D.

Four early-phase studies being presented yesterday, during the 61st American Society of Hematology (ASH) Annual Meeting and Exposition spotlight the rapid advances being made in cellular immunotherapy for blood cancers. Researchers will present the results of early-phase studies of emerging “second-generation” cellular immunotherapy products that strive to overcome the limitations of existing products.