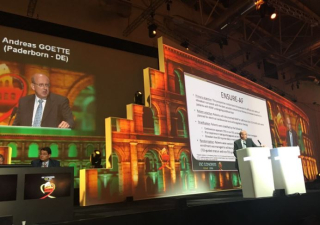 Patients with atrial fibrillation (AF) who need anticoagulation before undergoing electrical correction of their abnormal heartbeat (cardioversion) may benefit from treatment with edoxoban - a non-vitamin K antagonist (VKA) oral anticoagulant (NOAC), according to results of the ENSURE-AF trial.

While VKA anticoagulation works well, it has a major limitation in that it requires regular monitoring and dose adjustment to ensure that patients reach anticoagulation targets, explained Prof Goette. This can sometimes delay cardioversion for several weeks. “At a practical level, our study results show that newly diagnosed non-anticoagulated AF patients can start edoxaban as early as two hours prior to their cardioversion procedure if they have access to transoesophageal echocardiography (TEE) or 3 weeks prior without.” Edoxaban was previously shown to be safe and effective compared to standard VKA therapy (enoxaparin/warfarin) among patients with AF in the ENGAGE AF-TIMI 48 study, but the impact of electrical cardioversion was not systematically assessed in that study. ENSURE-AF, the largest randomised clinical trial of anticoagulation for cardioversion in patients with AF, “provides the largest prospective trial data for a NOAC in this clinical setting,” noted Prof Goette. “Results suggest that edoxaban is an effective and safe alternative to standard enoxaparin/warfarin, a VKA therapy.”

The phase 3b study, involving 239 study sites in 19 countries in Europe and the United States, included 2,199 patients with documented non-valvular AF who were scheduled for electrical cardioversion after anticoagulation therapy.

A total of 1,095 patients were randomised to receive edoxaban, while the remaining 1,104 received enoxaparin/warfarin (dosing varied depending on patient characteristics).

Of these 988 (90·2%) and 966 (87·5%) patients, respectively, were cardioverted either electrically or spontaneously, some with the use of transoesophageal echocardiography (TEE).

The primary efficacy objective of this study was to compare the incidences of the composite endpoint of stroke, systemic embolic event (SEE), myocardial infarction (MI) and cardiovascular (CV) death between the two groups at day 28 (ITT analysis).

The primary safety outcome was a composite endpoint of major and clinically relevant non-major (CRNM) bleeding events at 30 days.

In short, “edoxaban had similar rates of major bleeding and thromboembolism compared to well-managed, optimized enoxaparin/warfarin therapy. The results were similar whether TEE-guidance was used or not, whether patients had received prior anticoagulation or not, and in patients with a broad range of associated comorbidities."

Patients with atrial fibrillation (AF) who need anticoagulation before undergoing electrical correction of their abnormal heartbeat (cardioversion) may benefit from treatment with edoxoban - a non-vitamin K antagonist (VKA) oral anticoagulant (NOAC), according to results of the ENSURE-AF trial.